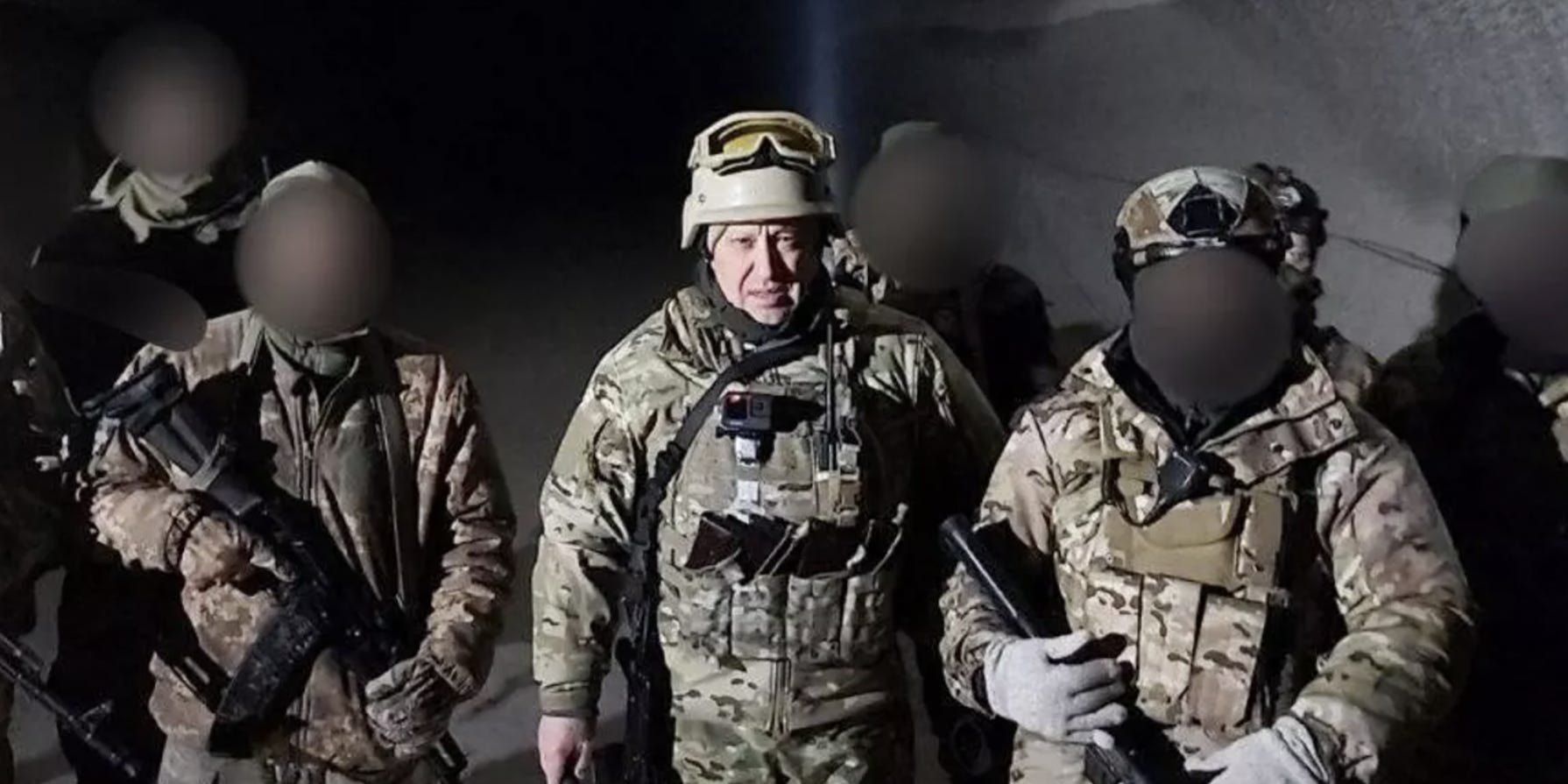 Wagner Group chief Yevgeny Prigozhin in what Russian state media described as the salt mines of Soledar on January 10.

The war in Ukraine continues to go poorly for the Russians, and that is creating rifts among their leadership.

Indeed, with curses and excuses, Yevgeny Prigozhin, leader of the Wagner Group and President Vladimir Putin’s favorite mercenary leader, may be preparing to justify a failure in one of the fiercest battles of the war: Bakhmut.

Two recent videos illustrate what may be pre-emptive efforts to rationalize Wagner’s failure. They may also be two of the most public displays of the intense rivalry that has developed between Wagner and Russia’s regular military. 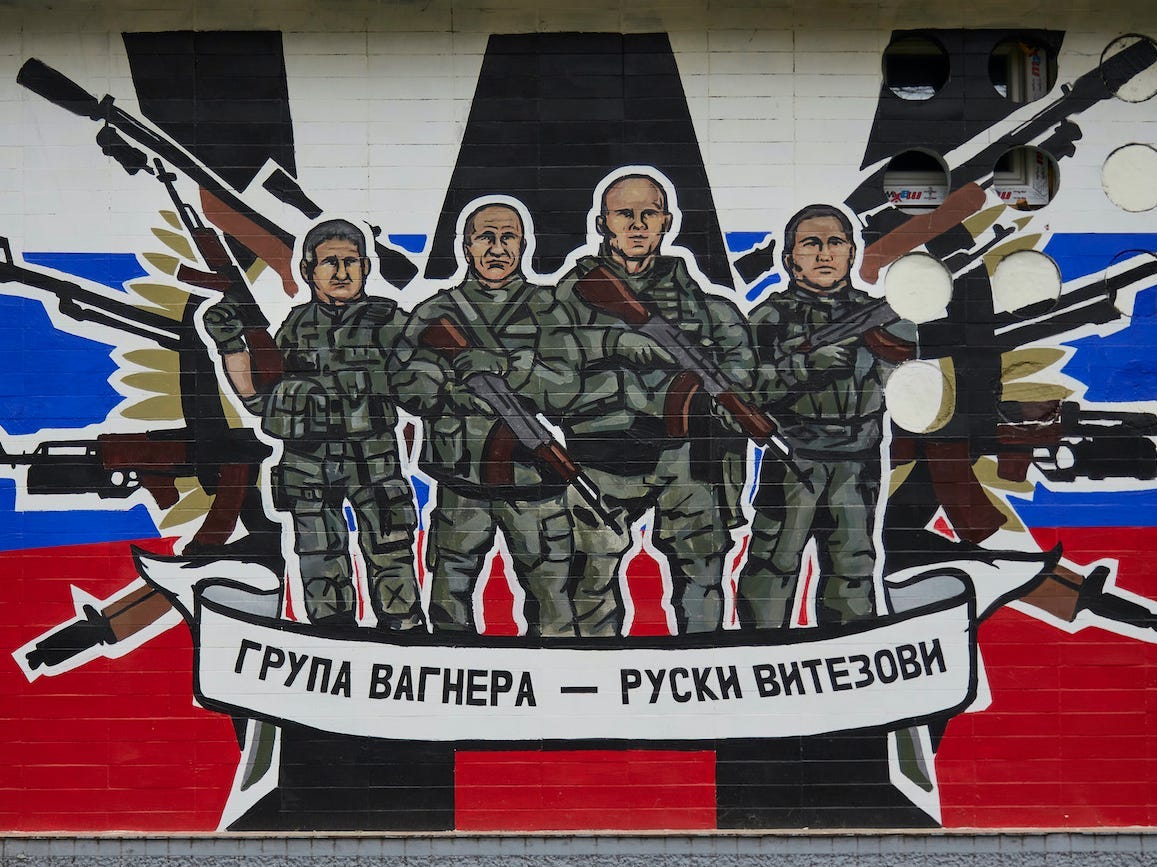 A mural in Belgrade that praises the Wagner group and its mercenaries fighting in Ukraine.

In an obscenity-laced tirade published in the closing days of 2022, Wagner Group mercenaries called Russia’s senior military officer, Chief of the General Staff Gen. Valery Gerasimov, a “fucking motherfucker” because of what they say is a lack of ammunition supplies and logistical support from Moscow to the group’s fighters.

Prigozhin not only backed his mercenaries up but continued the direct assault against Russia’s top officers. In an audio message posted on the official Telegram channel of his firm, Concord Management, Prigozhin said, “when you’re sitting in a warm office, it’s hard to hear the problems on the frontline, but when you’re dragging the dead bodies of your friends every day, and seeing them for the last time, then supplies are very much needed.”

In a second video, published in early January, Prigozhin and purported Wagner mercenaries tried to justify their lack of progress in Bakhmut, blaming a lack of materiel support from the Russian military for their struggles to overcome intricate Ukrainian defenses. 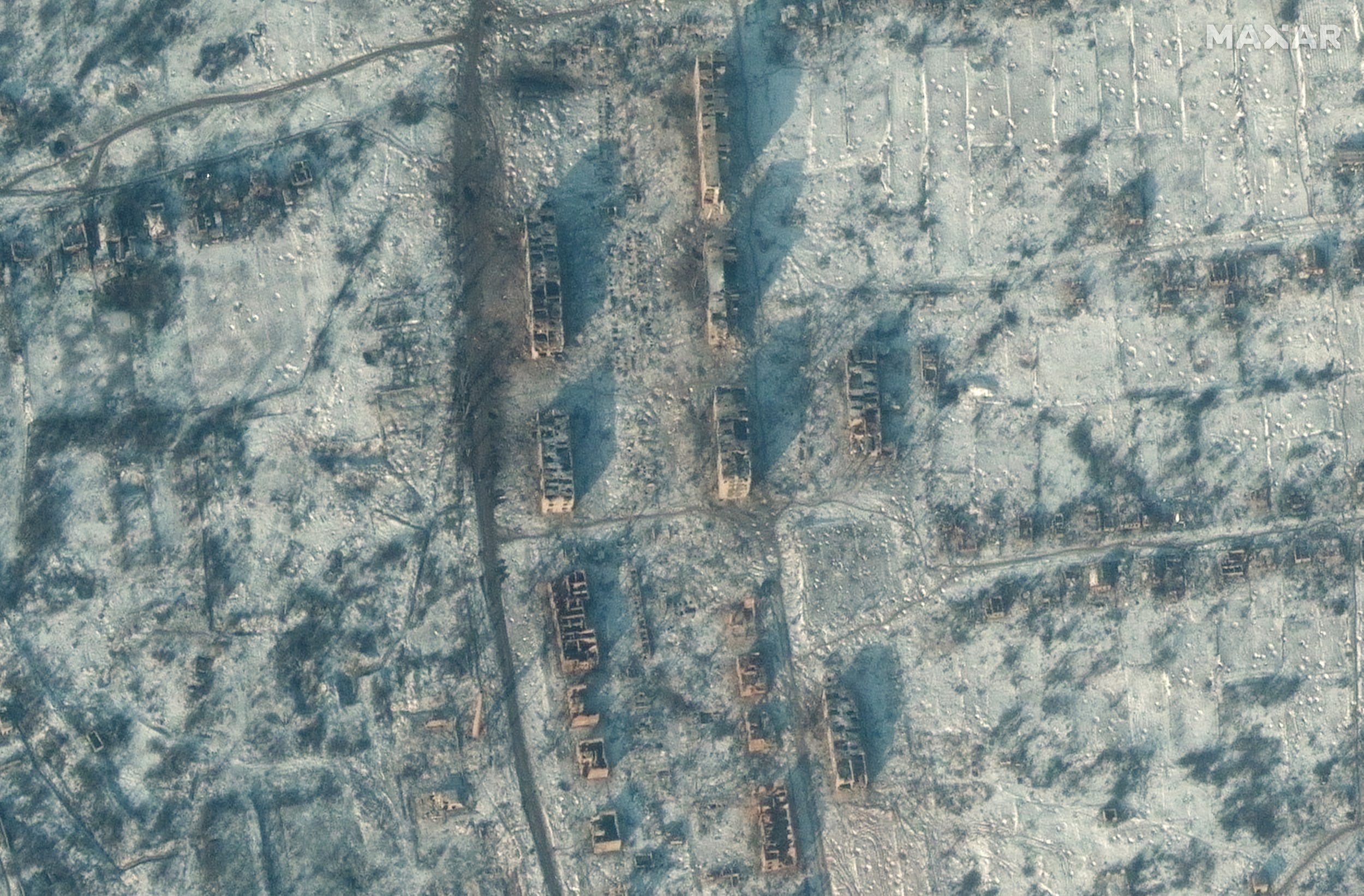 Satellite imagery of damage around Bakhmut and Soledar.

The Institute for the Study of War, a Washington DC-based think tank, assessed that with the video, Prigozhin “is likely setting information conditions to blame Wagner Group’s failure to take Bakhmut on the Russian Ministry of Defense or the Russian industrial base.”

In mid-January, Putin replaced Gen. Sergei Surovikin with Gerasimov as the overall commander of Russian forces in Ukraine. There are differing explanations for the change, but Surovikin, who is also commander of Russia’s Aerospace Forces, was widely viewed as an ally of Prigozhin and Wagner Group. His removal may be an attempt by the Kremlin to balance the dynamics between the two camps.

Gerasimov issued new general orders for all troops in Ukraine in an attempt to bolster morale and discipline. Prigozhin was quick to criticize them — another instance of the mercenary leader’s long-running challenge to Russia’s military leadership.

The war in Ukraine has brought Prigozhin, known as “Putin’s chef” for his catering business, out of the shadows. He has admitted being the leader of Wagner Group, which was long suspected, and become a visible presence in the group’s operations in Russia and in Ukraine. 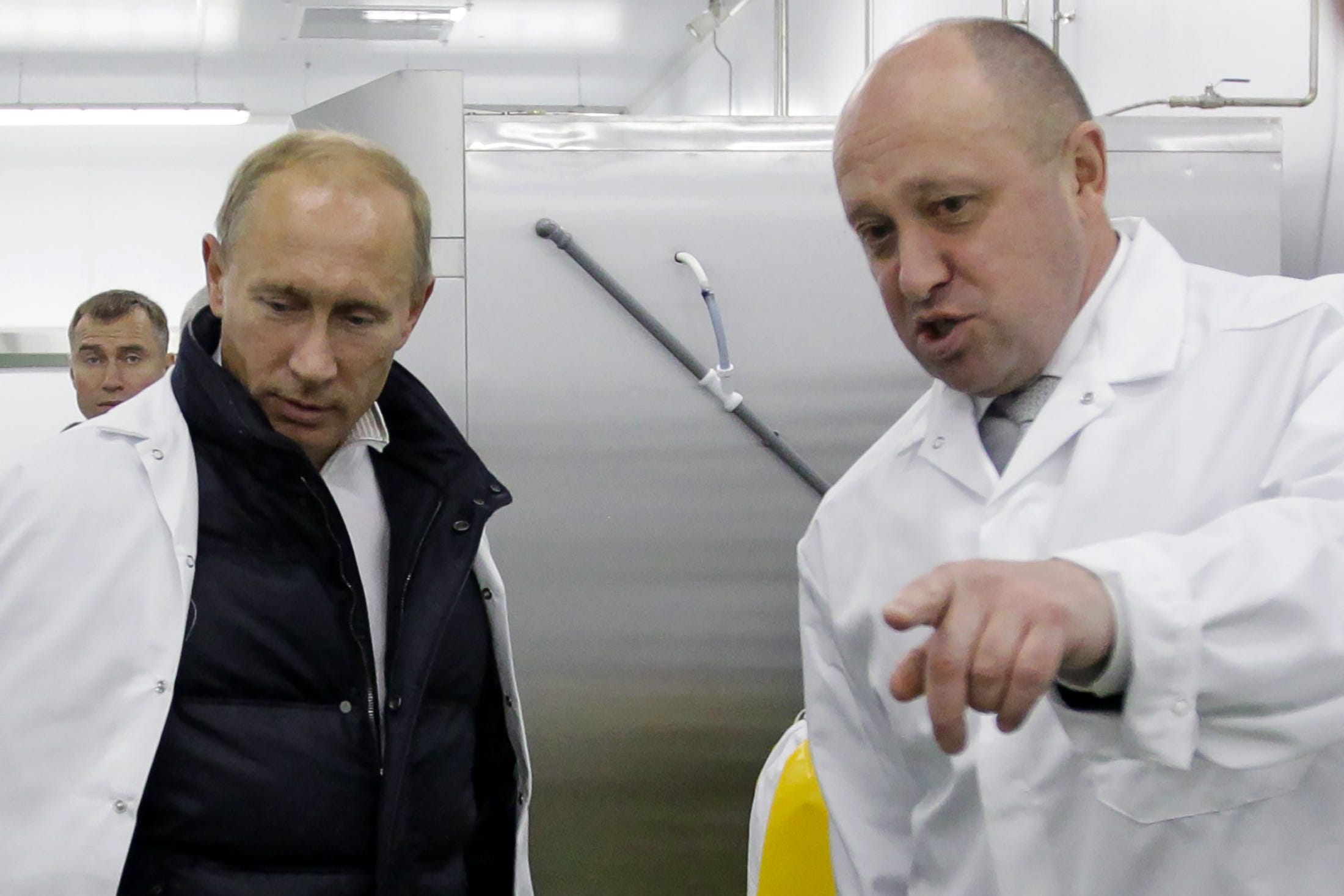 Prigozhin, who is cultivating his own his image through social media, hasn’t hesitated to directly criticize the Kremlin, claiming that some Russian officials are traitors that want Russia to lose the war.

In an autocratic Russia where regime members and allies who cross Putin are often stripped of power and even killed, Prigozhin is likely making such brash statements with Putin’s tactic support. Indeed, Putin likely views the public feuding as a way to distract from his role in the debacle in Ukraine.

While Gerasimov’s promotion may be a Kremlin effort to boost the Russian military in that ongoing war of words, Prigozhin “may double down on his flashy advertisements” in order “to assert the superiority of his forces,” the Institute for the Study of War said in another assessment. 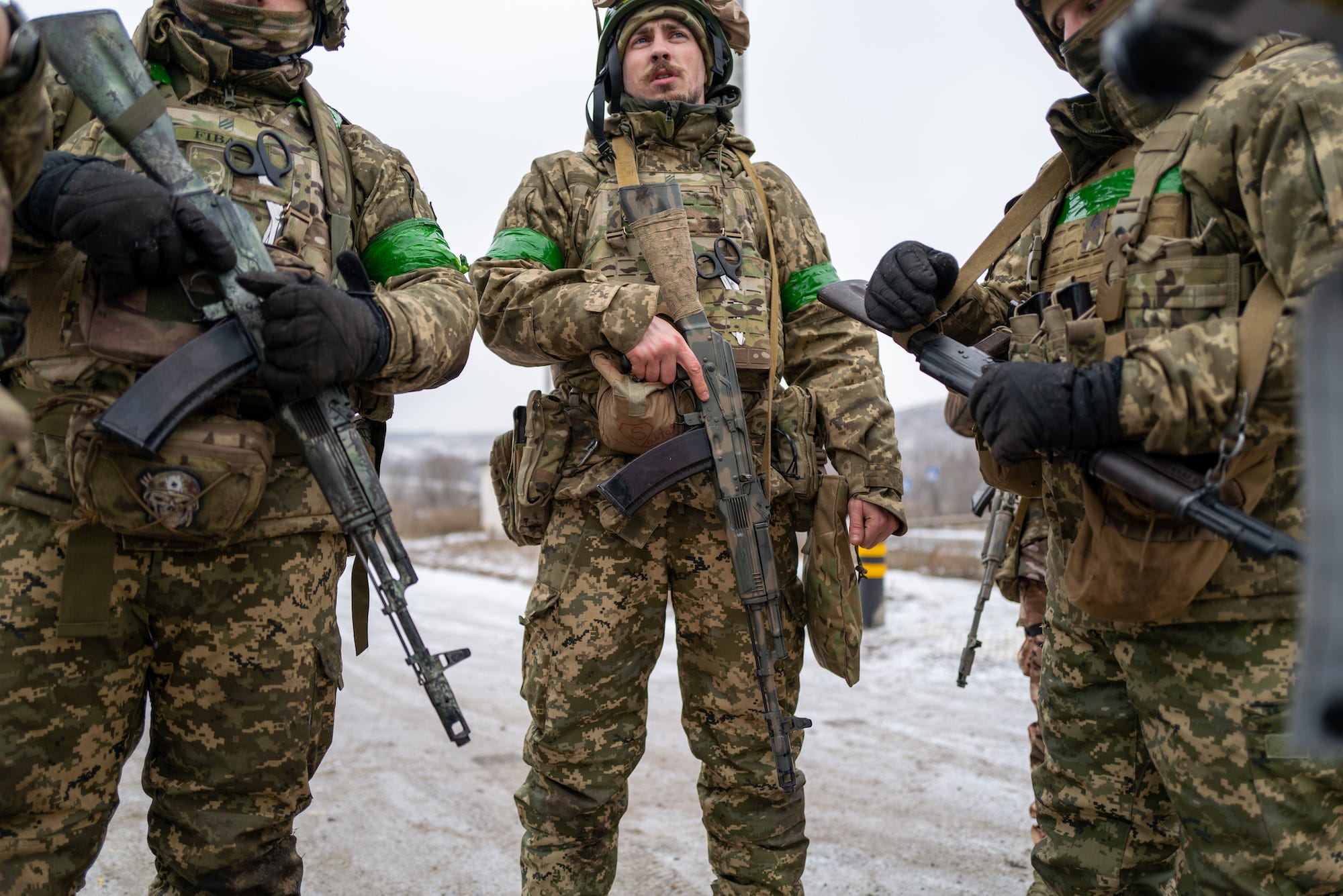 Ukrainian soldiers on the outskirts of Bakhmut on January 14.

Since the early summer, the Russian forces have been trying to capture the town of Bakhmut in eastern Ukraine. Wagner has taken the lead, feeding its mercenaries into brutal fighting around the town.

Russian forces have only managed to advance a few miles at the cost of thousands of troops and valuable military hardware. Despite some recent successes to the north in the small salt-mining town of Soledar — which sparked more fueding — the Russians don’t appear any closer to taking Bakhmut itself.

With the campaign in Ukraine faltering, the Kremlin allowed Wagner Group to recruit convicts directly from Russian prisons. In exchange for serving a six-month tour with Wagner, convicts were offered pardons — if they survived.

Many haven’t. In December, when Russia’s attack on Bakhmut was at its height, 1,000 Wagner mercenaries were killed in just a few weeks, a US official said. 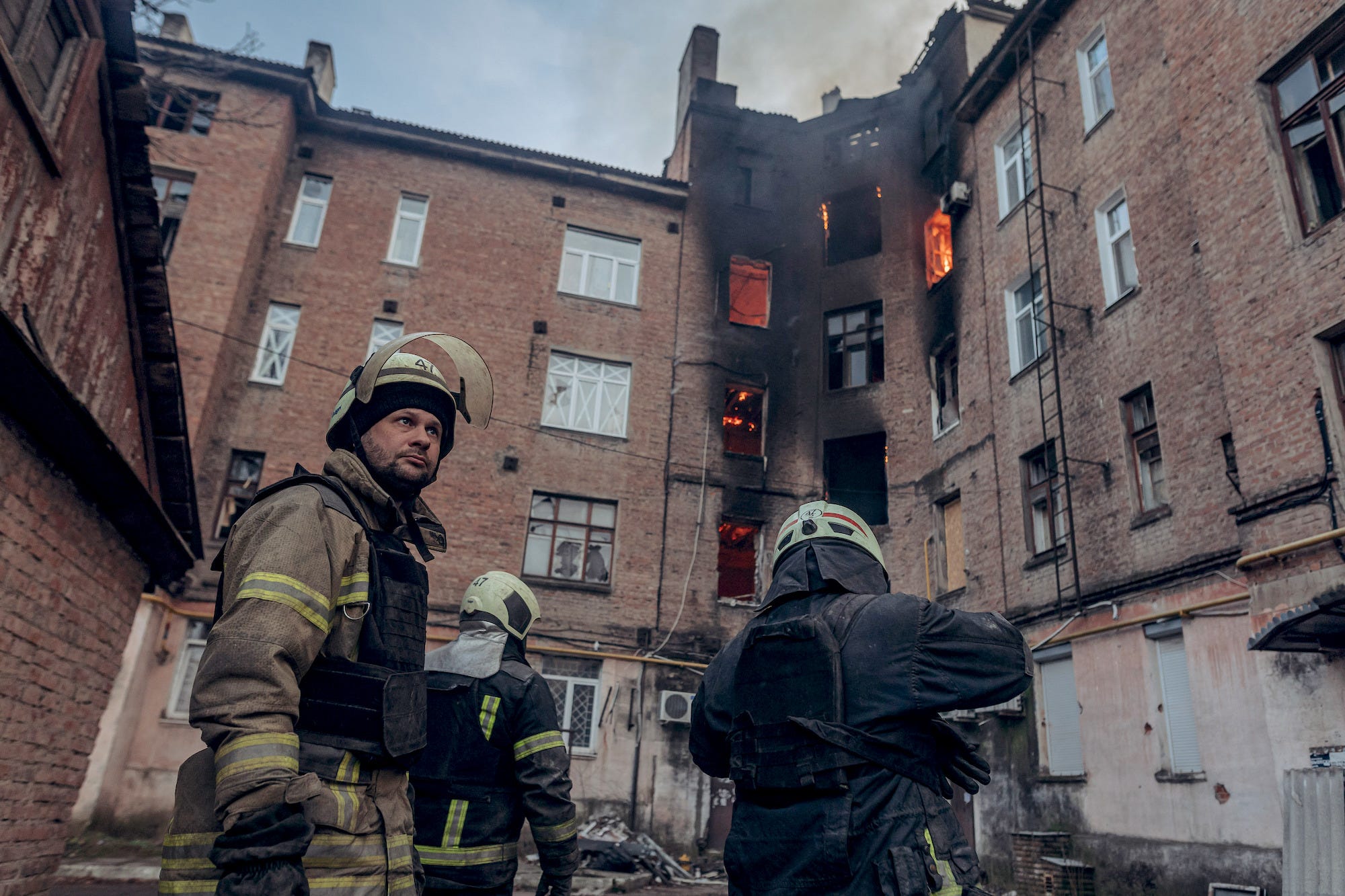 Emergency workers try to put out a fire caused by Russian attacks in the center of Bakhmut on December 23.

Western assessments suggest Wagner has lost more than 4,000 killed and over 10,000 wounded in total — a casualty rate of almost 30%.

But with tens of thousands of fighters in Ukraine, Prigozhin doesn’t seem phased. The mercenary leader and his forces appear emboldened by their minor successes around Bakhmut. Prigozhin recently took a photo with Wagner fighters in what appeared to be a salt mine in Soledar, scene of the heaviest fighting around Bakhmut.

But in the Kremlin, stars can fade as quickly as they rise if they fail to achieve the goals of the boss: Putin. With Wagner faltering at Bakhmut and Gerasimov in charge of the war, Prigozhin’s hopes of challenging Russia’s military leadership “seem to have been delusional,” the Institute for the Study of War said on Sunday.

Stavros Atlamazoglou is a defense journalist specializing in special operations, a Hellenic Army veteran (national service with the 575th Marine Battalion and Army HQ), and a Johns Hopkins University graduate. He is working toward a master’s degree in strategy and cybersecurity at Johns Hopkins’ School of Advanced International Studies.