There’s a kind of background noise.

A nasty little music orchestrated by Putinist propaganda and its band of useful idiots.

It’s the idea, broadly, that Ukraine at war and martyred is also one of Europe’s most incorrigibly antisemitic countries.

So, once and for all: What’s the story with Ukraine and anti-Semitism?

The truth is, of course, that Ukraine in the ’30s and ’40s of the 20th century was a bloodland for Jews.

Soviet Ukraine, or Ukraine Sovietized, or, more precisely, Ukraine buffeted between Sovietism and Hitlerism, was one of the theaters of the Shoah by bullets, with, counting just the ravines of Babi Yar, 33,771 Jewish men, women, and children forced to dig the pits where their warm corpses would be piled, still shivering, not quite dead.

And when I say “Soviet” or “Sovietized” it’s not to minimize the part played in the massacre by compatriots, in the countryside or the cities—but it is to recall that there have been, and there are, two Ukraines.

One that was yet to exist as a free and sovereign nation; which the Ukrainian-born Russian poet Yevgeny Yevtushenko depicted, in his requiem to the dead of Babi Yar, as that of the “barroom regulars” thirsting for the “blood of pogroms,” stinking “of vodka and onion,” and, when the victims, “kicked to the floor,” begged for mercy, encouraging the assassins to “Beat the Yids, Save Russia!”—yes, Russia…

And then another Ukraine; the one that liberated herself from that Russia; the one that, since the onset of the U.S.S.R., then the Maidan Revolution, and then the invasion of Putin’s army, refuses the status of vassal, of the humble twinned servant, of the Cinderella of the tundra, that the invaders, drunk on their Lebensraum, wished to relegate her to; and the one that, having become this young free country, having irrevocably fallen in line with the democracies of Europe, is now turning the page on its past.

This Ukraine knows that she is one of the four countries to have counted, along with Metropolitan Archbishop Andrey Sheptytsky and many others, the greatest number of Righteous Among the Nations.

This is the Ukraine of Uman, the city of Rabbi Nachman of Breslov, where I filmed, for my upcoming film, Slava Ukraini, a rav, in a kind of echo of the Righteous, recounting how it was in his synagogue that the peasants of Cherkasy Oblast came to find refuge on the first days of the Russian attack. 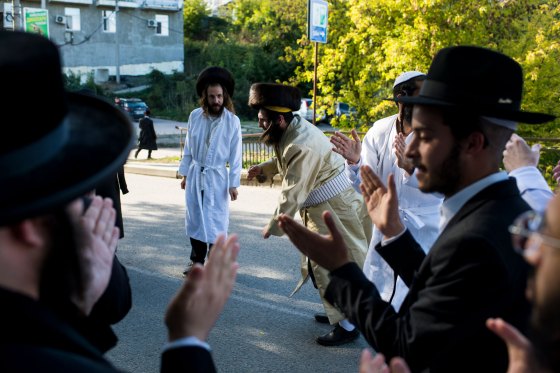 Pete Kiehart—ReduxHasidic pilgrims sing and dance during the annual Rosh Hashanah pilgrimage to the tomb of Rabbi Nachman of Breslov in Uman, Ukraine, on Sept. 27, 2022.

It’s the only country in the world where, on December 17, first day of Hanukkah, on the Maidan, that historic revolutionary square representing dignity and resistance, one could see the following: Hasidim raising a giant menorah; a whole people, starting with the mayor of Kyiv, Vitali Klitschko, joining in on the lighting of this flame; and the flame shining brightly atop a city bombarded and deprived of electricity—“the Russians send us ballistic missiles,” joked a rabbi. “We’ll send back Kabbalistic missiles!”

It’s the country of the Azov regiment, one of whose commanders, Ilya Samoilenko, survivor of the hell of Azovstal and soldier of limitless audacity, is just back from Israel. He went to Masada to replenish his well of strength to return to combat; and the image of this brave soul treading the hot stones of that shrine to Jewish resistance while in cold Ukraine it snows, the idea of a Ukrainian zealot clambering over herbs and the rubble of the Judean fortress millenary twice over, carrying, in his head, the destruction of Mariupol, the bombs and the ruin that defiled the basements of the steel plant where he held out, he too, 40 days, are extraordinary. Is this visit not the most scathing retort against the idiots who promise, contra the winds of History, to return Ukraine to its demons?

And this Ukraine is also—we can never repeat it enough—the homeland of Volodymyr Zelensky, the Churchillian president elected in a landslide, who is, also, a Jewish hero: the story of this descendant of survivors of the Shoah who had, at the outset, neither tanks, nor apparatus, nor apparatchiks to take on the Giant, but just his country’s hard-won liberty. Doesn’t it seem straight out of a Biblical tale?

In the face of the return of Goliath the Philistine, isn’t this the rebirth of little David, master of truth and war chief, an artist who knows how to sing, and is also an incomparable strategist, who finds ways to use only the intelligence of his muscles and his guile to oppose the invasion?

Isn’t this the story of Abraham rising up alone, according to the Midrash, to battle the armies of the five kings who hold Lot hostage?

And isn’t this Judah Maccabee sealing the resounding victory of the weak over the strong, the humble over the proud, the few over the many, and, in the end, over the false brilliance of the desecrated temple, the victory of the tiny oil lamp whose light is not that of power, but of exception? 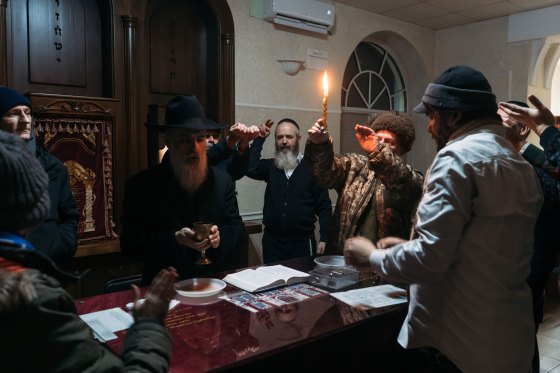 A cunning trick of reason.

An adventure of memory.

But the fact, whether we like or not, remains.

History is not always a curse.

It is not the eternal return of resentments and crimes.

If there was ever a place, in this crazy war in front of Russian neo-fascism, barbarism, and terrorism, where one can hear the echo of the Jewish soul, it’s in Ukraine?