Last Tuesday, the British Broadcasting Corporation released the first episode of “The Modi Question,” a two-part documentary series that tracks how the Indian Prime Minister Narendra Modi climbed the political ranks of the ruling Bharatiya Janata Party during his time as the Chief Minister of the state of Gujarat.

The documentary was originally broadcasted in the U.K., but it quickly generated hype in India after unauthorized video clips began circulating on social media platforms, reminding viewers of Modi’s controversial role in the 2002 Gujarat riots—and prompting the Indian government this week to block it from being aired on Indian platforms.

What is the documentary about?

The 59-minute documentary takes an in-depth look at the 2002 Gujarat riots—one of the worst outbreaks of religious violence in India since the country’s Independence in 1947. It traces how the riots erupted after a train carrying Hindu pilgrims in the northern state of Gujarat was set on fire and killed 59 people. The Muslim community was held allegedly responsible for the incident, leading to heightened retaliatory attacks and the deaths of over 1,000 Muslims.

The riots took place under Modi’s watch, who at the time was Gujarat’s Chief Minister. Raw and chilling footage reveals how the police stood by as Hindu mobs attacked Muslims and religious attacks took hold of the state.

Why is the documentary so controversial?

In India and abroad, questions about Modi’s complicity in abetting the violence have generated controversy for decades, but the BBC documentary goes a step further in highlighting his role through expert commentary — it reveals that a previously unpublished report from the British Foreign Office held Modi “directly responsible” for the “climate of impunity” that enabled the violence and said it had “all the hallmarks of an ethnic cleansing.” The BBC also uncovers other memos by the British government and Western diplomats, including the former British Foreign Secretary, Jack Straw, who unequivocally criticizes Modi’s conduct at the time.

However, the documentary also features interviews with former BJP politicians who support Modi and strongly deny his involvement in the riots. They cite the Indian Supreme Court’s verdict in 2013, which stated that there was insufficient evidence to prosecute him.

Read More: How India’s Record-Breaking Population Will Shape the World

According to Kenneth Roth, the former executive director of the NGO Human Rights Watch, Gujarat has always been one of the most sensitive issues for Modi because he demonstrated “passivity in the face of large-scale ethnic violence.” But, Roth adds, Modi shows intolerance towards a range of criticism due to fear of reputational harm, and his reaction to this documentary is no different.

“People tend to assume that India is a democracy, that there’s nothing to worry about when it comes to free expression,” says Roth. “But Modi is not abiding by the requirements of free expression in the way that a Democratic leader should.”

Representatives for the BBC and India’s foreign affairs ministry did not immediately respond to TIME’s request for comment. 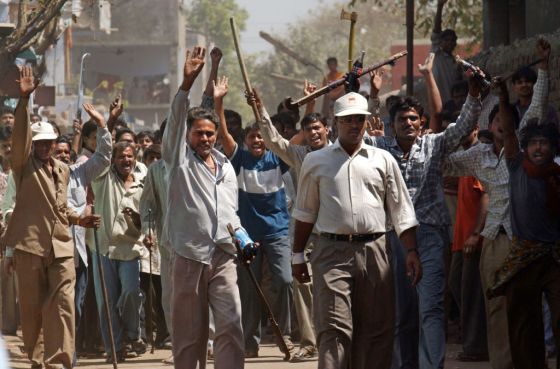 Ami Vitale—Getty Images401733 09: A mob of Hindus wielding swords and sticks back off after Indian Rapid Reaction Force officers stopped them from attacking a small group of Muslims March 1, 2002 in Ahmadabad, India.

Can the government block the documentary from being aired in India?

Under the emergency powers granted by the country’s information and technology law, the Indian government has already issued orders to YouTube and Twitter demanding that they block any content related to the documentary from being published on their platforms.

Kanchan Gupta, a senior adviser to the Indian government, announced the news on Twitter on Saturday, calling the documentary “vile propaganda” which undermined “the sovereignty and integrity of India” and had the potential to “adversely impact India’s friendly relations with foreign countries.” The decision was backed by various Indian ministries, including the Ministry of External Affairs, which found the documentary pushed a discredited narrative, cast “aspersions on the authority and credibility” of the Supreme Court, and created “divisions among Indian communities.”

So far, YouTube and Twitter are complying with the Indian government’s orders. Over 50 tweets containing links to the documentary have been taken down, according to the Lumen database. They include tweets by Derek O’Brien, a member of the Indian Parliament, as well as Supreme Court advocate Prashant Bhushan and American actor and political activist John Cusack.

Media organizations and digital rights activists have long criticized the IT laws that enable the Indian government to censor social media content. The laws have been challenged in the Supreme Court, as well as multiple High Courts, with proceedings currently underway.

Read More: How Jacina Ardern Led With Her Humanity

What has the Indian response to the documentary and the government’s decision been?

Critics of Modi say the block affirms Modi’s ardent base of supporters, who have decried it as “colonial” and “white” propaganda. “The bias and lack of objectivity and frankly continuing colonial mindset are blatantly visible,” Arindam Bagchi, spokesperson for the foreign affairs ministry told reporters at a press conference last Thursday.

But according to Roth, the “principal victims” of Modi’s censorship are Indian citizens. Therefore, minimizing valid concerns raised about Modi in the documentary as colonial partisanship “shirks responsibility for his own intolerance of legitimate criticism.”

This is compounded by the fact that banning a documentary that was not otherwise popular in India has only invited more viewers, says Hartosh Singh Bal, the political editor of Indian magazine The Caravan, who also appears in the documentary as a commentator. “Frankly, the ban has been pretty stupid because it’s attracted far more attention to the documentary than would have been otherwise possible,” says Bal. He adds that it is now being screened across school campuses as “an act of resistance” among teenagers who previously viewed these events as a dated chapter in history.

“In some senses created far more awareness than the government could have expected,” adds Bal, noting that it has brought new relevance to the conflict.

While the events of 2002 catapulted Modi into his current position, Bal says he remains extremely sensitive about his international reputation and still wants to be viewed as a statesman. But clamping down on this documentary in what Bal calls a “ham-handed fashion” will only confirm the expectations of his fiercest critics.