In a typical soviet-era apartment, tucked away in a concrete-covered cul-de-sac in Kyiv, Anastasia Zolotarova sits solemnly on the sofa, holding her mother’s hand.

Her mother, Julia, has fond memories of Mariupol, the place where she and her parents spent the majority of their lives. Those pre-February 2022 reminiscences, however, now feel incompatible with her recollection of what came after – the 100 days she was forced to watch the once bustling seaport city turn into a living hell.

“Before the war, me and my friends loved Mariupol,” Julia tells Kyiv Post. “A big dreamy city that was growing up under a big government development program. New hospitals. New parks. New schools. New roads.”

Nestled on the north coast of the Azov Sea, at the mouth of the Kalmius River, Mariupol is the second-largest city in Donestk Region. A place where manufacturing thrived, the city was a centre not only for Ukraine’s lucrative grain trade, but a heavy engineering hub and the home of the now infamous Azovstal Iron and Steel Works.

The region is no stranger to conflict. Following the Revolution of Dignity in 2014, which  saw Ukrainians defiantly reject Russian oppression and political interference, pro-Russian protests and unrest erupted across eastern Ukraine, inciting the Russian-controlled self-proclaimed Donetsk People’s Republic (DPR), which briefly occupied Mariupol until the city was eventually recaptured by Ukrainian forces in late spring 2014.

“I Woke up on Feb. 24 to the sound of big explosions,” Julia recalled. “From that moment, Mariupol, my life, my world – everything changed.”

A strategic target for the invaders and their proxy forces, Mariupol was bombarded with missiles and heavy shelling, with the Red Cross warning that the siege had become a humanitarian crisis and that an estimated 90 percent of buildings in Mariupol had been destroyed.

Working and living almost 800km away in Kyiv, Anastasia could only watch in horror as the daily news reports rolled in. The bombing of a maternity hospital, killing seventeen people. An airstrike on the Mariupol Drama Theatre. The destruction of an art school that had been sheltering 400 people. The mass murder of civilians as Russian soldiers spilled into the city and placed it under official occupation.

With no way to escape and all communication down across the city, her mother Julia, Julia’s husband, and her elderly grandmother and grandfather, were left stranded in a desperate struggle to survive.

“There was bombing throughout the day, every single day,” says Julia. “After two or three days there was no water or gas or communications.

“It was winter. The windows of our apartment had been blown out by shelling. The water inside was frozen. It was so cold.

“The first thing we had to do was find something to give us heat. But if you had to go anywhere, you had no energy to do it.”

“The second problem was when we ran out of drinking water. It was impossible to find clean water anywhere so we were forced to drink the water from the heating system, from the boiler.

“After two weeks, friends of my mother found a house with a swimming pool. The house was destroyed but the pool still had water.”

Julia and others would regularly make trips to this newfound source of water, navigating past the dead bodies of their neighbours, people whom they had once shared polite greetings with on stairwells and watched their children playing outside and growing up.

Russian occupiers forbid the burying of these bodies, says Julia.

The route to the rubble-reduced house and its swimming pool was a dangerous one.

“There was shooting and shelling all around us,” says Julia. “There were some people who made the journey to the house who didn’t return.”

They boiled much of the water over a makeshift firepit embedded into the ground. They then carried it, hungry and cold back to their apartments.

“The Russians often came to our houses and were aggressive,” Julia continues. “They would tell us and other people that we had to leave and go to Russia. They did everything to pressure the people of Mariupol to go to Russia. But if someone wanted to be evacuated to other parts of Ukraine, they refused. Only Russia.”

The shelling continued every day, intensifying significantly on one fateful night in March, when Julia’s street was bombed.

Anastasia takes over from this point, her mother now wiping tears from the corner of her eyes, unable to retell the painful series of events.

“My Mother, her husband, and my grandparents took shelter in the basement,” Anastasia tells Kyiv Post. “There were around 13 people down there. 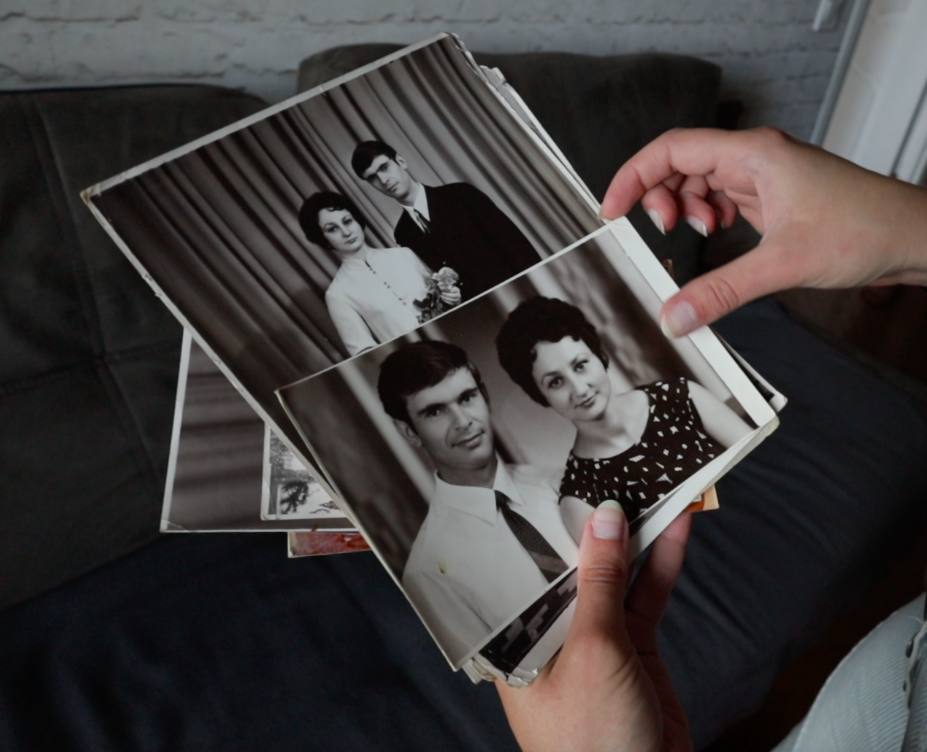 “They hid in there from the shelling, but the shelling had caused a fire in the building. Smoke began to seep into the basement. It was difficult for them to breathe.”

Eventually, some of the group, including Julia and her husband, decided to venture back up to briefly fill their lungs with air.

“They went up for just three minutes, then suddenly an airstrike hit the home. The ceiling collapsed in an instant and buried everyone alive.”

Eleven people died beneath the rubble. Among them was Valentyna Polishchuk, Anastasia’s grandmother.

“They [her mother and neighbours above ground] couldn’t help them,” says Anastasia. “All they could do is hear their screams and moans, and then nothing. One of the girls had half of her body under the rubble, crushed, dying. But there was nothing anyone could do. ”

The rubble of her mother’s house, Anastasia understands, has since been cleared by the Russians, who still occupy Mariupol.

“The bodies were found and taken somewhere, but we don’t know where. We don’t know what happened to my grandmother’s body. All we know is that it was discovered. Maybe it’s now in a mass grave.”

Asked if she hopes to find her late grandmother’s body and hold a proper funeral, Anastasia is firm in the criteria required to obtain closure.

“It is only possible once Mariupol is free.”

“I am sure that Russia will be defeated by Ukrainian forces,” she adds. “Everything that the Russians do to Ukraine is genocide – everyone in the world understands it. We have the support of the whole world in this war, and I hope the war will end within a year.

“We need to retake Crimea, Donetsk, and every part of Ukraine stolen. Then the work begins to rebuild.”

Anastasia glances at her still tearful mother and ponders over her trauma.

“She doesn’t know how to find the power to deal with all of these painful emotions, losing her neighbours, her parents, her money, her documents – her whole life destroyed.”

But then Julia takes her daughter’s hand, clasping and holding it tightly and lovingly in her own. She smiles and thanks her for the part she played in her eventual escape.

“I had to get them out of Mariupol,” Anastasia explains. “She had no documents, so I had to find a way.

“My grandfather left Mariupol on April 22 with a Ukrainian government-led evacuation. There was an agreement with the Russian occupation administration, who supplied the busses that took him to no man’s land, where he was guided back over into Ukrainian-held territory.

“With mother, I found an American humanitarian group that previously worked helping civilians in Afghanistan.”

Although admitting she isn’t religious, Anastasia places her palms together and smiles at the ceiling. “I hope these people’s lives will last forever – they are heroes. I found them, spoke with them, and they agreed to collect my mother and bring her to Kyiv.”

Anastasia is now head of the external and internal communications department of the Passenger Company of state rail operator Ukrzaliznytsia. Her work, she tells Kyiv Post, is a good distraction from her family’s pain and suffering.

“Since the war started, Ukrzaliznytsia has evacuated about 4 million Ukrainians from all over the country to more safe cities in the west of Ukraine.

“We also provide humanitarian aid to the frontline and ensure wide international support for Ukraine by bringing presidents, ministers, and other diplomats to Kyiv. I think my work is important and I am proud to be doing it.”

She hopes that one day soon the trains will once again roll into Mariupol. It is only there, amidst a maelstrom of happy memories and harrowing events, that she and her family can get a taste of closure by finding her beloved grandmother, and saying the final goodbye that Russia so brutally denied them.

The post “My Nan Was Killed in Mariupol – We Want Her Body Back” appeared first on Kyiv Post.