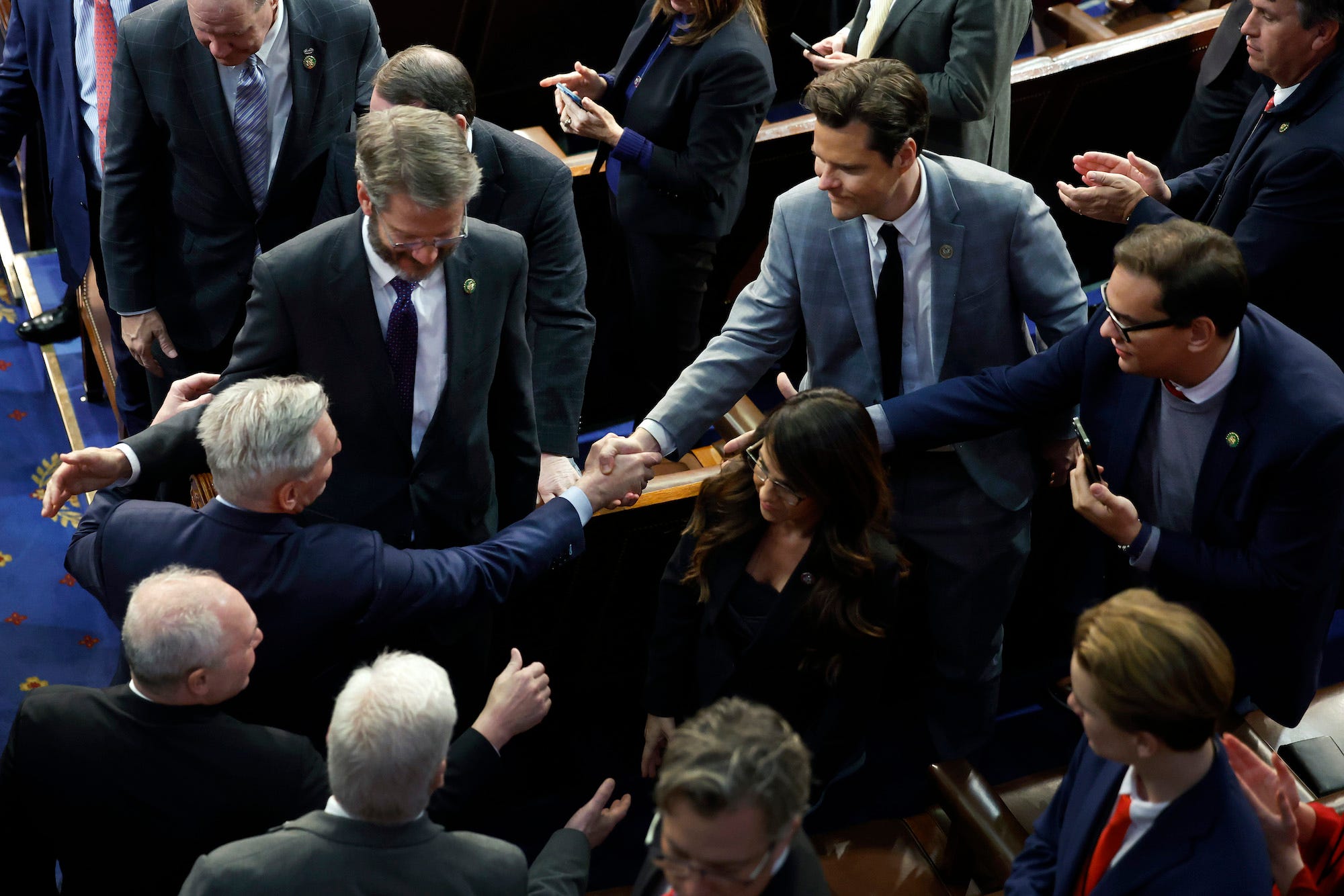 While other House speaker vote rebels got tangible perks like plum committee assignments or chummy leadership roles after getting out of Kevin McCarthy’s way earlier this month, precisely what Republican Rep. Matt Gaetz gained from the grueling ordeal remains hazy.

In the weeks since he and 19 other House Republicans forced McCarthy to endure 15 ballots before allowing his historic bid to proceed, Gaetz has bragged plenty. He’s taken credit for a rule change that allows any member of Congress to call for a vote to oust McCarthy, the release all of the security camera footage recorded during the January 6 siege at the US Capitol, and securing the same amount of resources and staff for the Judiciary Committee’s new “weaponization of the federal government” panel as House Democrats devoted to the January 6 select committee.

But many of those priorities were also championed by far-right House Freedom Caucus members like Reps. Byron Donalds of Florida, Scott Perry of Pennsylvania, and Lauren Boebert of Colorado — all of whom landed coveted committee posts after wearing down McCarthy.

Gaetz’s responsibilities in the 118th Congress, at least so far, appear to be static. Which has some Republicans on and off the Hill wondering if the scandal-plagued Gaetz was more interested in rehabbing his image.

“Last year, everyone was focused on the federal investigation around him regarding sex trafficking of minors. And now, because he held his vote out and negotiated so long, he somehow looks like a temporary power broker,” Ron Bonjean, a former GOP leadership aide and now a partner at political consulting firm Rokk Solutions, said of the timely rebranding effort.

“Some people could be fooled into believing that Gaetz is a much more serious player than previously thought,” Bonjean added.

In March 2021, news broke that federal investigators were looking into if Gaetz violated federal-sex trafficking laws by allegedly engaging in a sexual relationship with a 17-year-old. Investigators ultimately declined to press charges.

Aides for Gaetz, McCarthy, and various Freedom Caucus members did not immediately respond to Insider’s request for comment about side deals cut during the speaker vote deliberations.

Republican Rep. Mike Rogers of Alabama, who serves with Gaetz on the House Armed Services Committee, lunged at him on the House floor as the speaker vote fight dragged into its fourth day.

Republican Rep. Marjorie Taylor Greene of Georgia used to delight in needling McCarthy on Gaetz’s social media channels but is now firmly in the California Republican’s camp. She has since snubbed Gaetz online.

Republican Rep. Nancy Mace of South Carolina, who also serves with Gaetz on the Armed Services panel, lashed out at him amidst all the chaos, declaring him a “fraud” for stoking the political unrest purely for profit.

“Every time he voted against Kevin McCarthy last week he sent out a fundraising email,” Mace said January 8 on CBS’s “Face the Nation.”

Cashing in on congressional dysfunction is classic Gaetz, a GOP aide asserted. 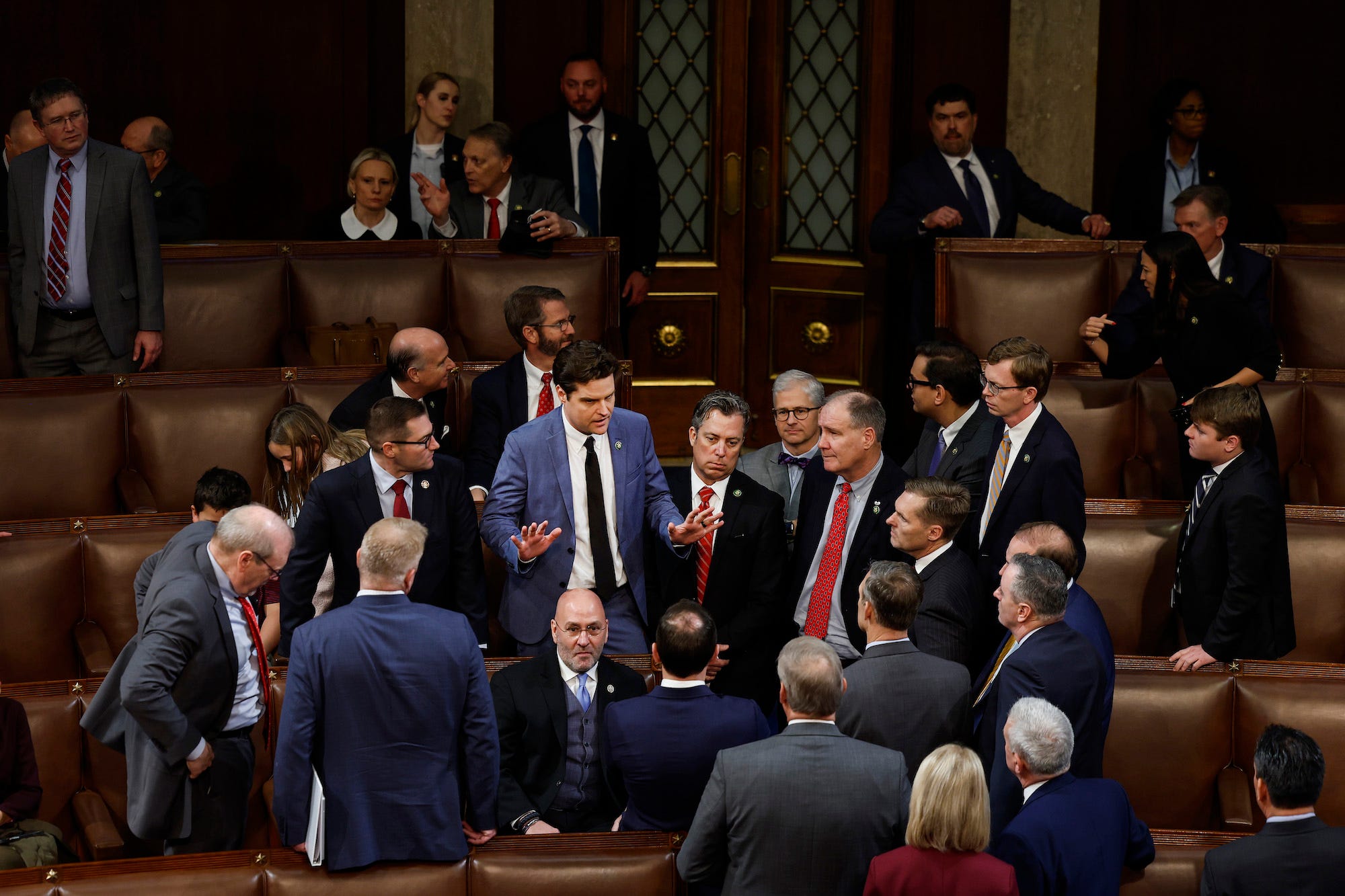 Republican Rep. Matt Gaetz of Florida talks to fellow members-elect during the second day of elections for Speaker of the House at the US Capitol Building on January 4, 2023 in Washington, DC.

“As he wanted it to be seen, it was him against the establishment,” Maura Gillespie, a former House GOP leadership aide who most recently worked for newly retired Rep. Adam Kinzinger of Illinois, told Insider.

In order to present himself as the “true hero of his DC story,” Gillespie said Gaetz tends to focus on GOP base-baiting activities like obstructing, fear-mongering, and trumpeting conspiracy theories.

“He doesn’t know how to govern and is not interested in acting in good faith for his constituents or his conference,” Gillespie said.

One former House staffer turned GOP strategist, who requested anonymity in order to speak freely because they consult on congressional campaigns, said Gaetz appears to be doing what he does best.

“I don’t think this guy’s looking to be a policymaker,” the GOP strategist told Insider. “I think he’s looking for a platform to monetize MAGA. And to put himself out there as an unencumbered warrior for their cause.”

Doug Heye, a former House leadership aide turned GOP strategist, said the jury’s still very much out on Gaetz’s motivations and his endgame.

“I can understand and explain the Marjorie Taylor Greene story of where she was two years ago —  not on committees for instance — compared to today. With Gaetz, I don’t think we know where that story is yet,” Heye told insider.

He said that figuring out Gaetz may take some more time. Or, it could be as easy as believing that guy who donned a gas mask to ridicule a House vote on COVID-19 relief is committed to troublemaking.

“Maybe the guy just likes attention,” Heye said. “Because here’s the thing. If you say enough crazy stuff, and you wear gas masks on the House floor, you’re gonna get a lot of attention.”

“Everyone has always viewed him as a showman, as someone who’s there for political theater, as someone who has shown no interest in ever legislating,” the aide, who requested anonymity in order to avoid political retribution, told Insider, adding that Gaetz hasn’t garnered “a lot of respect among his fellow members.”

An Insider review of Gaetz’s legislative history shows that the four-term Floridian hasn’t authored anything that’s been signed into federal law since getting sworn into office in January 2018. By comparison, non-voting DC delegate Eleanor Holmes Norton had two bills signed into law over the same horizon.

In total, 725 House bills have become law since Gaetz arrived in Washington.

“Having to actually be held accountable for legislation would be terrifying to a Matt Gaetz,” Gillespie said, adding that his focus has always been on “abolishing, defunding, investigating, and restricting” political opponents.

‘Everyone is a Joe Manchin now’

Given that McCarthy can only lose four GOP votes on any given issue in the narrowly divided House, it’s more than likely McCarthy and others will be forced to humor Gaetz, whether he wants actual input or just publicity.

“This is the beginning of a very long two years,” Bonjean said, noting that Gaetz could inject himself into every high-profile negotiation from here on out.

“He might be there every time working on transforming his brand,” Bonjean said. “Everyone is a Joe Manchin now and can negotiate things that they want.”

Manchin, a West Virginia Democrat, is one of the swing voters who Senate Majority Leader Chuck Schumer has had to work closely with in recent years to get President Joe Biden’s agenda through what was a 50-50 Senate.

The former House staffer turned GOP strategist said even without any new committee assignments Gaetz could pop by panels that interest him just long enough to record a buzzy Instagram post.

“There’s nothing to prohibit him from dropping in on a committee if McCarthy blesses it,” the GOP strategist said, adding that Gaetz has “the kind of cachet where they’re not going to deny him five minutes of questions.”