In March 2022, hundreds of students at Yale Law School disrupted a panel with Kristen Waggoner, a conservative lawyer who has argued religious liberty cases before the Supreme Court, arguing that her presence was a “slap in the face” to “queer students.” Yale’s response to the incident left the school with egg on its face: Though the protest clearly violated Yale’s free speech policies, which do not allow protesters to disrupt speakers, not a single student was disciplined.

Now Waggoner is returning to Yale Law for another talk. And this time, administrators aren’t leaving anything to chance, banning press and anyone without a Yale Law School ID, including undergraduate students, from the event. They are also trying to prohibit covert cell phone recordings, which picked up audio of last year’s disruption. It is not clear whether the ban on media includes the Yale Daily News, Yale’s flagship student paper, whose editor in chief, Lucy Hodgman, did not respond to a request for comment.

The event, scheduled for noon on Tuesday and hosted by the Federalist Society, will also feature Nadine Strossen, the first female president of the American Civil Liberties Union. Yale’s draconian measures aren’t sitting well with her. She is calling the school’s decision to ban the press “unjustifiable,” telling the Washington Free Beacon, “For an event that is discussing important First Amendment issues—and is designed to illustrate Yale Law School’s announced recommitment to free speech—it is sadly ironic that elementary freedom of speech principles are being violated.”

Waggoner and Strossen are set to discuss a pending Supreme Court case about the First Amendment—Waggoner argued the case last month—on which the two politically opposed women largely agree. The event comes two months after the law school issued a statement reaffirming its commitment to free speech and is widely seen as a do-over of Waggoner’s abortive talk last year.

“It’s one thing to take steps to protect against physical disruption,” Strossen said. “But is there any evidence that members of the press were responsible for the disruptive protest in the past?” Waggoner did not respond to a request for comment.

The restrictions suggest that administrators are looking to avoid a repeat of the blowup last year, which created a public relations nightmare for the law school after it was captured on video and audio and was reported by the Free Beacon. They also come as Yale Law School dean Heather Gerken has been reaching out to federal judges who have announced that, given what they view as the school’s hostility to conservative views, they will no longer hire clerks from the school.

Yale’s activist students are likewise looking to avoid a repeat of what one of them, Henry Robinson, called “last year’s doxxing disaster,” in which the Free Beacon posted footage of law students disrupting Waggoner’s panel.

Robinson emailed members of the law school’s LGBT group on January 17 to outline the “precautions” that had been put in place. “No press” signs will be “prominently displayed,” and administrators will be on hand “to enforce this,” Robinson said in the email, recounting what Debra Kroszner, the associate dean of the law school, told him and other students at a meeting. To be admitted to the talk, students will need to present administrators with a valid student ID.

The law school does have a formal media policy predating this event, which only allows press with “prior permission” from the school. It is not clear how often that policy is enforced—and while the law school does have signs that warn against unauthorized recordings, a high-ranking member of the Federalist Society said he didn’t recall signs saying “no press.” Nor is it normal for administrators to check every student’s ID before an event, two students said.

The zealous enforcement of these rules appears to be the result of activist pressure.

Robinson’s email also indicates that students pressed Kroszner to impose “additional safeguards”—including a “phones at the door” policy that would require attendees to surrender their devices before entering the event—though she declined to do so. She also declined to commit to making a statement in support of any students “doxxed” at the event, arguing it would draw “more media attention.” 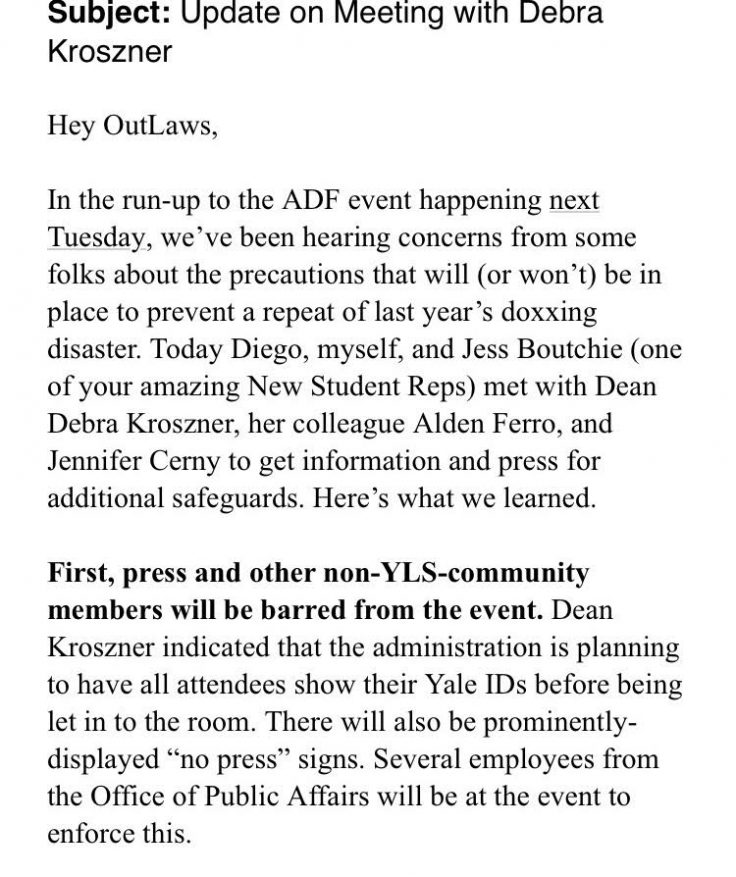 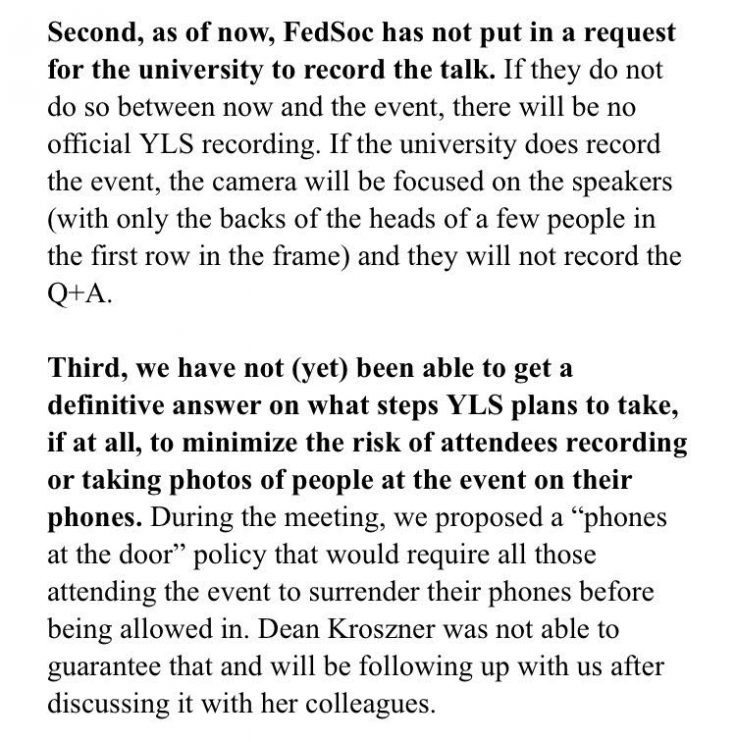 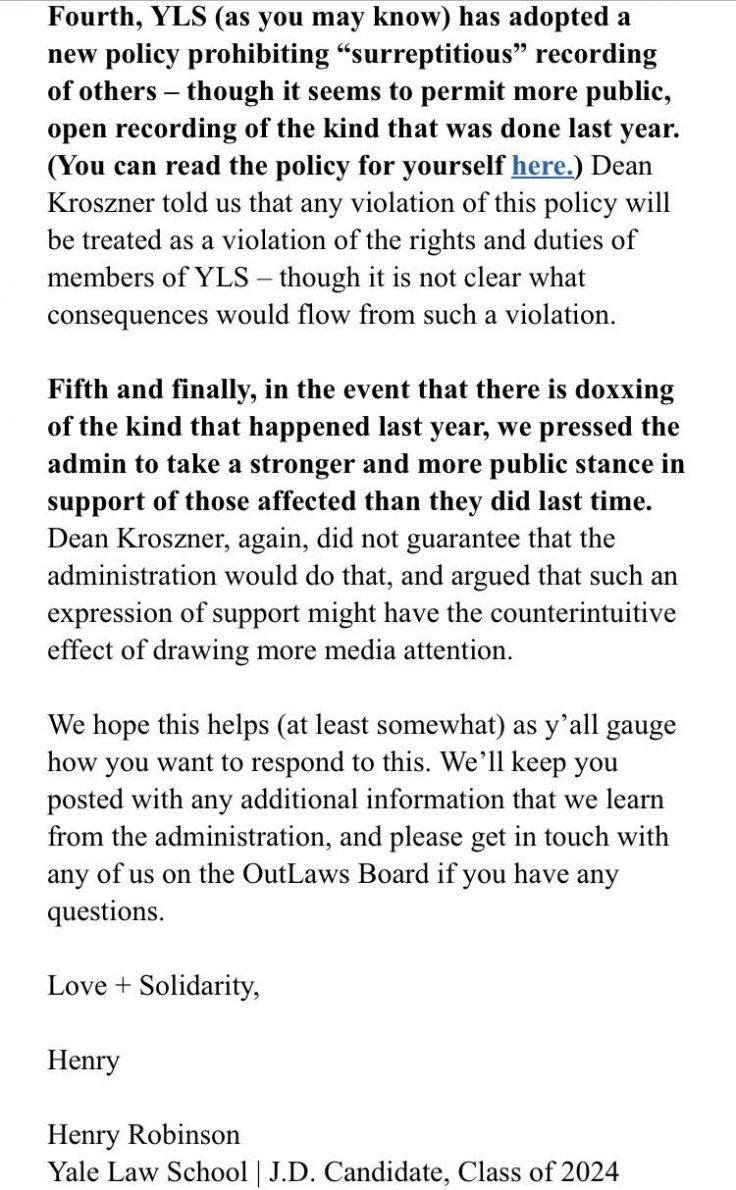 Robinson and Kroszner did not respond to requests for comment. 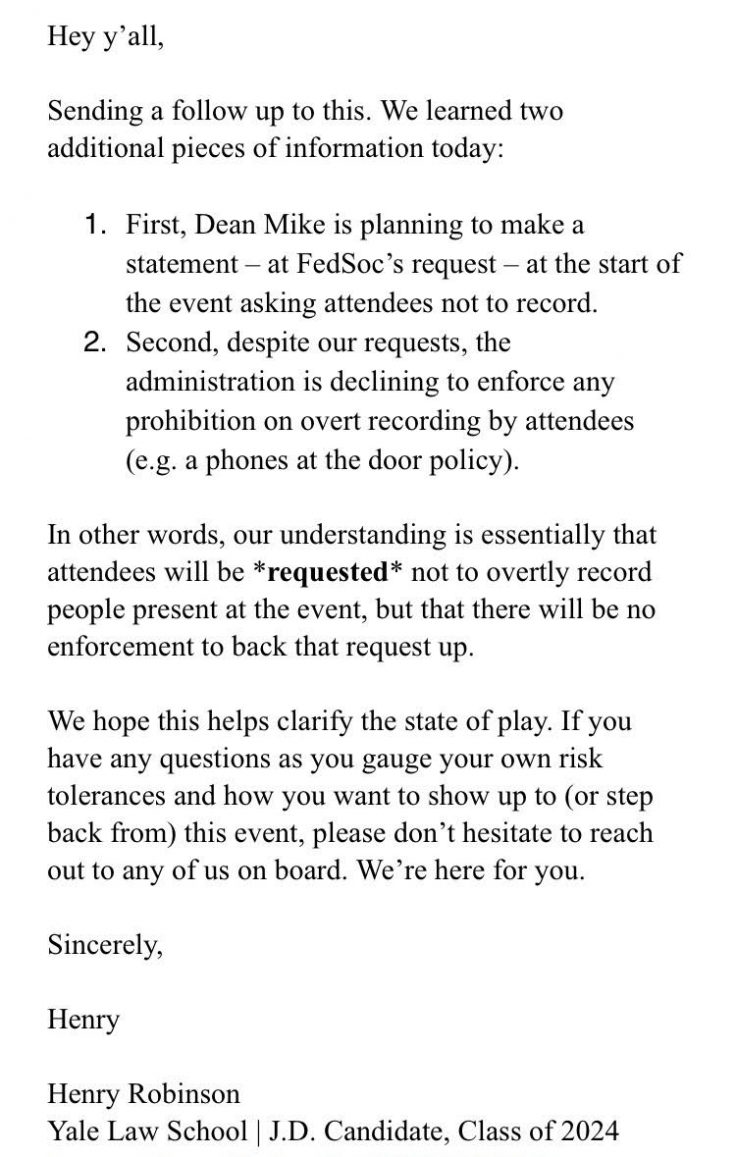 When the Free Beacon asked for permission to attend the event, a law school spokesman, Alden Ferro, denied the request and claimed it was the Federalist Society that had opted for the law-students-only policy. But according to the high-ranking Federalist Society officer, it was law school administrators who proposed the policy in the first place.

“I got the sense they wanted to avoid a circus,” the officer said. He added that Yale’s Federalist Society chapter agreed to the policy because it shared the desire to “minimize protest”—and because it wanted to “minimize tensions” with the administration.

Though students will be allowed to record the event, they will be prohibited from doing so surreptitiously—a rule the law school introduced after Trent Colbert, a second-year law student, recorded administrators pressuring him to apologize for using the term “trap house” in an email. While the law school has said that this policy will “encourage the free expression of ideas,” critics have attacked it as a thinly veiled ploy to avoid future scandals.

James Ho and Elizabeth Branch, two of the judges boycotting the law school, said as much in an October letter to Gerken. “The only reason we even know about” the trap house incident “is because that student recorded his interactions with school officials,” they said. “Does this new policy somehow improve free speech conditions on campus? Or does it simply ensure that the school will not be caught in the future for infringing on speech?”

Waggoner is the president of the Alliance Defending Freedom, a conservative legal nonprofit that defends religious liberty. Yale’s chapter of the Federalist Society has invited her and Strossen to discuss 303 Creative LLC v. Elenis, a case about a Colorado web designer who refused to make sites promoting same-sex marriage. The case is a sort of spiritual successor to Masterpiece Cakeshop v. Colorado Civil Rights Commission, which Waggoner argued and in 2018 won.

Though Strossen supports same-sex marriage, she told the Free Beacon that she agrees with Waggoner’s position in 303 Creative LLC. She agreed to participate in the event, she said, to illustrate that liberals and conservatives can find common ground on free speech issues. That was also the premise of the March 2022 event, which featured Waggoner and Monica Miller, an attorney with the American Humanist Association.

Strossen also said she’d been told that the law school is only allowing law students to attend the panel—not undergrads or other graduate students.

“I respect that Yale is committed to preventing disruptive protest,” Strossen said. “But there’s no evidence that letting in undergrads”—who were not involved in the disruption last year—”will undermine security. Depriving them of their right to hear this discussion is unjustifiably speech-suppressive.”